Short introduction on My Little Pony
In 1981 Hasbro created a toy called My Pretty Pony wich became the start of My little Pony and a toy line that has been selling for almost 30 years. 1982 they started to produce the first generation (G1) My Little Pony with a serie of six colorful ponies. The toys grow more popular as time then on with more ponies than you could imagen  following up with all kind of merchandise for stuffed animals to table wear.
The toyline has changed over the years and has grown really popular again with the release of the "new" TV show : Friendship is Magic that is now on their third season!

My personal Pony history
When I was young me and my younger sister collected and loved my little pony. We had a lot of them than and still have a few. When we got older, around teen, we thought that we out grown them and they got packed a way.

In the begining of 2012 I needed a new hobby (I do a lot of different crafts) and stumbled on to custom ponies at deviantart. I decided that I would try that and orded some ponies from ebay and went to the store to get the supplies I needed. I saw a few people that collected MLP but I said to my self that it was NOT something I would do!
Than I spent more and more time online looking at all these ponies that was out there. I was remembering all the ponies I had and in the end I could not resist them!

A while later I also found a few of my sisters and my old ponies, I got all of them and now they are safe with me again! You can find them here and they are marked whit "-Childhood Pony"

My Collecting
My favorites are the pony babies and that is what I collect the most. I'm also in love with MIB/MOC/MIP (ponies in their original package) and I do hope to get a larger collection of them someday.
So far I only collect G1 and G1, a few G3 has come in but it is nothing that I am aiming for. I love Friendship is Magic (FIM) and my favorite character is Pinkie Pie, wich you will Notice when you brows through my photos. 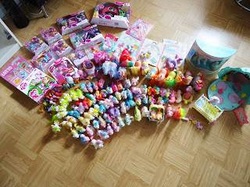 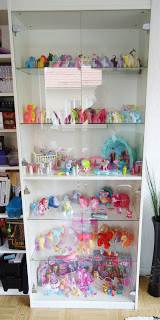 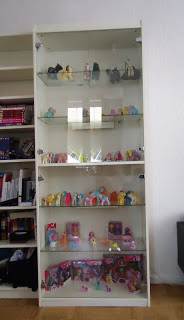 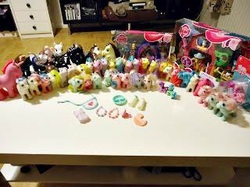