Short introduction on Littlest Pet Shop
In 1992 Kenner (than a part of Tonka/Hasbro) released the first generation of Littlest Pet Shop. The first release contained six diffirent small animals with a cage and a few smaller accessories. The line lasted until 1996 and had than produced over 60 different sets!
In 2000 Hasbro made the desiccation on closing down Kenner and merged the toy-lines with their own.

It wasn't until 2005 that Hasbro released the Littlest Pet Shops new design and promoted it as Littlest Pet Shop by Hasbro.
The new pets got bigger heads and eyes and looks more like the cartoons that eard than.
Now they have released over 2000 pets and with the new TV show just starting we hope to get many more!

My personal Pony history
I started my collection of pets in October 2012 when my fiance encouraged me to buy the toys, he said that they are cut and would be easy for hi to buy from me.
I was not hard to convince since they are too lovely and in the first few weeks I got guiet a few of them!

My Collecting
Right now I got a bit of a mixed collection, but so far I only have teen of them.
But my number one love is the bugs! Following that is toucans and cows.
What I would like to get now is some snails and more of the vending machine pets:) 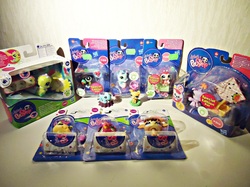