Short introduction on Keypers
In 1985 Tonka intrudused a line of toys wich were made hollow for the kids to hide treasurer in. They made the adult ones: lager in hard plastic with a key to open the storage, and baby keypers: smaller ones with a soft, plastic body that you press to open.
The adult Keypers came with a few accessories  a key, a brush, a key ring and a Finder, wich was an even smaller plastic figure that, in the stories, helped find the treasus that the Keypers would than protect.
The Baby keypers came with brush and one or two smaller accessories.

Tonka release two series of Keypers, the first one with six different animals, and one adult and one baby from each sort.
Later when Tonka released their second line of toys they brought back five of the original animals and added six new ones. This release had longer hair and glitter eyes and more "girly-er" than before. The male animales from the first line got a big make over: Sheldon the Tortois got a sex change and became Michelle and Keybord the Pengiun went from a black and white gentleman with top hat and bow tie to a pink penguin with long, curly hair.

Keypers grow quiet popular in the UK/Europe and they released a lot of merchandiser such as lamps, table wear and bags.

My personal Keyper history
I was looking around in a Swedish sale site for ponies when I came a cross something that was called "keypers". In this ad a man was selling a MIB Tango. I was looking at it and tried to remember if I had ever seen these Keypers before, and came up with nothing. So with google as my friend I went on Keyper-hunt and I must say I liked what I found!
So I bought the MIB, wich was not a bad start on a collection, and took it from there!

My Collecting
I prefer the first serie the most since I find the animals more to my liking and I wish to find all of the adult ones, with a loose Tango, a Sheldon and a Keybord as my grails.
I wound also love to find the kangaroo Hero and the baby pingiun Kazoo. 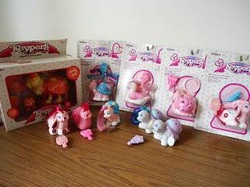